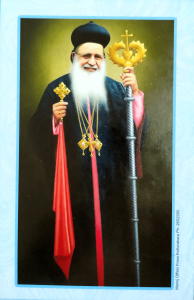 His Holiness Moran Mar BaseliosMarthoma Mathews II, Catholicos of the East and Malankara Metropolitan from 1991 to 2006, is the founder manager of this college. E. Mathews, born on 30 January 1915 as the eldest son of late Sri. Idiculla and late SmtAnnamma, PuthenVeettil, Perinad, Kollam was ordained a Sub-deacon on 17 April 1938, Deacon on 6 May 1941 and Priest of the Malankara Orthodox Church on 25 May in the same year. After his studies in Bishop’s college, Calcutta, Fr. E. Mathews taught Theology at Kottayam Theological Seminary during 1941-42. The celibate priest Rev. Fr. E. Mathews decided to lead a life of fasting and austerity at St. George Dayara, Othera, Thiruvalla. He was raised to the Ecclesiastic position of Remban in 1951 and to the Episcopal status on 15 May 1953. According to the tradition of the Orthodox Church, Rev. Fr. E Mathews was renamed His Grace The Most Rev. Mathews Mar Coorilos. His Grace was appointed the Assistant Bishop of Kollam Diocese from 1958. In that capacity His Grace founded the community of St. George (Bethlehem) Ashram, Chengamanadu. Later, the University of Serampore conferred on His Holinesses an honorary doctorate degree. His Grace, a visionary, versatile theologian, philanthropist, social reformer, missionary, and educationalist, grabbed the spirit of the post-independence period and ventured to revitalize the field of education. The arena of education remained an area of special interest to His Holiness, who was very eager to make full use of the existing opportunities and was ready to live up to the expectations that existed during the changing times. His Holiness successfully oversaw the functioning of numerous pre-primaries, primaries, high schools, industrial training centres, teacher training centres, training colleges, arts and science colleges, nursing colleges and professional colleges. He served humanity by running hospitals, orphanages and institutions for the handicapped.  His Grace Mathews Mar Coorilos, by the Divine Will, became His Holiness Moran Mar Baselios Marthoma Mathews II, the Head Shepherd, the Catholicos of the Orthodox Church in all continents. This spiritual successor of St. Thomas in Malankara minds, swayed over the flock from his Episcopal Throne at Devalokam, Kottayam. An undiminishing, magnetic and imposing personality with angelic grace, mesmerizing smile, bewitching behaviour and honeysweet tongue, enabled His Holiness to capably hold the reins of the Orthodox Church. After extending a very strong leadership to the holy church for more than six decades His Holiness was called back to inherit the unwithering crown on 26 January 2006. In accordance with his will and desire, his Holy remains was laid to rest within the beautiful chapel at the serene place called Sasthamcotta, near Kollam, a place he often chose for meditation with the Lord. May the Almighty grant us celestial blessings through his eternal intercession.